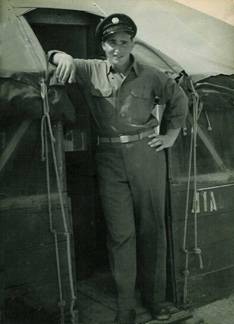 Whenever the discussion of kneeling during the National Anthem comes up, I simply realize that I will always stand because on June 6th, 1944 Jim Oliva and many others had to crawl!

I was honored to have a drink or two with Jim in his “Golden Years”, what his son Ed doesn’t get into much detail about in his article is that the 299th were the one’s made famous in movies like “The Longest Day” who provided the Bangalore Torpedo’s that freed up the bottle-neck on the beaches.

Below is the original article written by his son, my friend Eddie.

We are all gathered here today Dad to celebrate your 75th Birthday. Over the years you have touched the lives of everyone in this room. Seventy-Five years, that is quite

an accomplishment, and how fortunate we all are having known you.

But some of you here may not realize that Dad almost never lived to see his 19th Birthday. Let me share a little story with all of you. If any of you got to see the movie “Saving Private Ryan”, then you’ll be able to picture the details clearer of what I’ll be talking about. Your probably thinking what does that movie have to do with Dad’s 75 th Birthday. Well bear with me, listen and you’ll understand.

One of the things that Dad enjoys talking about is his days in the Army during World War Two. Especially the D-Day invasion that he was a part of. As a kid, I can remember Dad’s annual Army reunions. He and his buddies would share war stories, and re-live the various battles that they fought. I remember one story that my Dad would tell, that had a very special meaning to me, and I’ve never forgotten it.

The day was June 6,1944. D-Day. Dad was an 18 year old private in the U.S.Army’s 299 th Combat Engineer Battalion. Dad and his buddies were fighting their way onto shore at Omaha Beach in Normandy, France as part of the first wave of the allied invasion. His job was to blow up the metal and wooden crossed obstacles that the German Army had erected throughout the beach. This job put him and his buddies ahead of the heavy infantry, and armor units, that needed those obstacles cleared so that they could bring their heavy equipment and supplies onto shore from the Navy landing craft. As he fought his way toward shore, Dad saw many of his buddies being picked off by German guns as if they were ducks in a shooting gallery. There was no safe place to take cover from the heavy barrage of German bullets being fired at them, as they advanced on the beach. On this day it didn’t matter how good a soldier you were. All that mattered was whether you were lucky enough to have the bullets miss you.

The lucky soldiers lived through that day, which is sometimes referred to as “The Longest Day in history”. The lucky soldiers survived to come home and raise a family, and got to see many grandchildren grow up in a free world. Dad was one of those “lucky” soldiers. Maybe that is why I can still remember Grandpa Salvatore having Lucky Strike cigarettes, that he smoked for awhile. Why was Dad so lucky, and what does that have to do with today? Well let me continue.

During the D-Day invasion dad was partnered up with a buddy named Eddie Kiliansky. As the German soldiers saturated the beach with intense machine gunfire, Dad and Eddie somehow managed to do their job, and set explosive charges to blow up the beach obstacles. As Dad and Eddie crouched for sparse cover behind one of the obstacles, a decision was made between the two of them that would forever change their destiny. It was a decision made in a split second. One of them would have to move on to the next obstacle. It seemed a simple maneuver. Eddie decided he would go first, and Dad would follow. As Eddie started to move out, a German machine gun got him in the head, and killed him instantly.

This could very easily have been Dad who got up to move first, and if he had we would

not be here today celebrating his 75 th Birthday. My brothers, my sister and I would not even exist today if it would have been Dad instead of Eddie that the German machine gun got.

This story has special meaning to me. I was born on June 4, 1955. Eleven years after the D-Day invasion. Mom and Dad named me Edward in remembrance of Eddie Kiliansky. Had luck not been with my Dad on that fateful day June 6,1944 then I would not exist today. But instead, maybe somewhere else there would be another man, 75 years old named Eddie Kiliansky, with a son about my age named “Jim”, who was told that same story only with a different version of who moved first.

Dad, you’ve had some close calls over the years, but I don’t think any of them could be any closer than the day you survived the D-Day invasion. That fateful day determined your families existence.

We are all so grateful and lucky to have you as a part of our life over all these years as a son, a brother, and a husband. A father, a father-in-law and a grandfather. A brother-in-law, an uncle and a friend.

Thank-you Dad for all you have given us, and meant to us throughout our lives.

But most important, Thank-you Lord for giving us Dad.